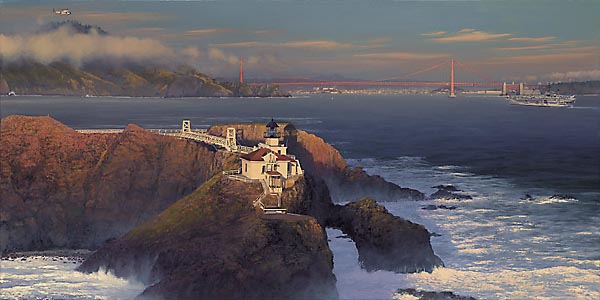 Distinguished by its gleaming white suspension bridge and captured in the radiant glow of twilight, Point Bonita: Last Light is a stunning portrait of a maritime landmark. And, in classic Phillips’ style it also pays tribute to San Francisco, The Golden Gate Bridge, the U.S. Navy and the U.S. Coast Guard (look closely). With all the different levels of appeal, we suggest you reserve it promptly—several of Bill’s other recent lighthouse prints, such as The Light Keeper’s Gift, have quickly gone into low inventory or sold out at publisher.

Published from the artist's original work.