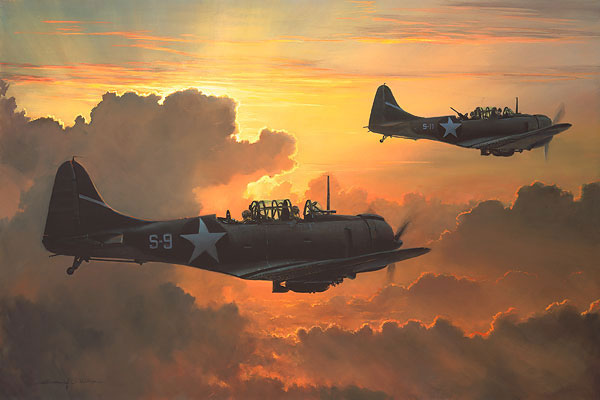 "Dauntless Against a Rising Sun" by William Phillips

“This painting contains everything I like about symbolic aviation art. It’s full of symbolism as two SBD-3s—S-9 and S-11 of VS-5—fly from the USS Yorktown aircraft carrier against the dark clouds of war and a rising sun, the symbol of the Japanese empire. In this case, the sun is symbolic of hope and the dawn of a new day as the tide turns in the Pacific at the Battle of Midway in June of 1942.

The name of the painting, Dauntless Against a Rising Sun, was a natural. A SBD dive-bomber was referred to as a “Dauntless” and the two in this painting capture the spirit of the U.S. forces in those dark days after the initial Japanese victories in the Pacific.