Artifacts Gallery - A Tiki Scare is No Fair

A Tiki Scare is No Fair 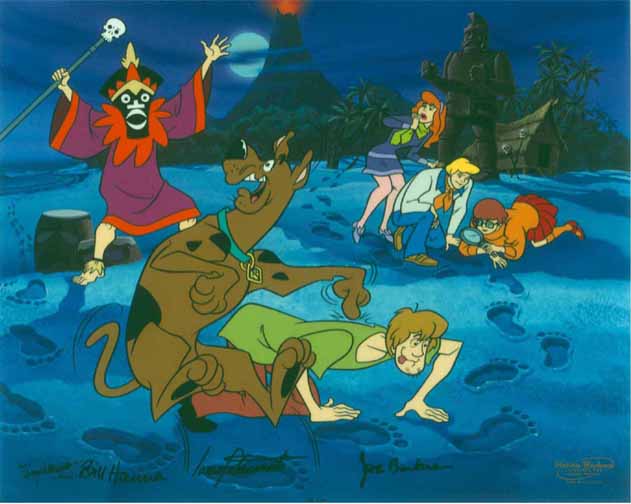 "A Tiki Scare is No Fair" by Hanna Barbera

This hand-painted limited edition cel was inspired by the frightful episode of “Scooby-Doo, Where Are You!” of the same name. In this image, Scooby-Doo finds a clue, along with Shaggy, Freddie, Velma and Daphne, as they vacation in Hawaii. A local witch-doctor threatens the Gang with the wrath of Mano Tiki Tia (a ghostly legend who has come to life) but the young sleuths solve the mystery (of course!) and finish their island vacation!

This cel was conceived of, drawn and signed by Iwao Takamoto , the original designer of the Scooby-Doo characters, and was produced exclusively for release at special Warner Bros. Studio Store Gallery events. This cel began with a drawing from Iwao Takamoto. A master inking by Helene Hunter was silk-screened, along with the Hanna-Barbera and Iwao Takamoto design seals onto an acetate sheet (or “cel”). Each cel was then expertly hand-painted on the reverse side using traditional Hanna-Barbera colors. The background layout drawing was also drawn by Iwao Takamoto and brought into living color by talented longtime Hanna-Barbera artist Dennis Durrell. Iwao Takamoto, designer, artist, and Hanna-Barbera employee of the longest standing, joined Studio co-founders William Hanna and Joseph Barbera in approving each cel with their signatures. In the final step of production, the edition number was hand-inked on each cel.