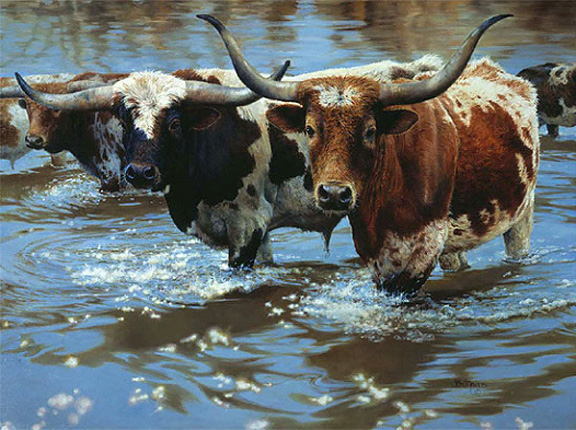 Texas longhorn cattle, with their characteristic horns, were almost extinct by the 1920s since modern day ranchers preferred a breed that could fatten up quickly and they no longer valued the longhorn’s ability to survive in high heat on little water, but lots of cactus, weeds and brush. In the 1930s they were protected and bred in small stocks, mostly out of the idea of the romance of the Old West but later longhorns became popular for their lean, lower-cholesterol meat. Commercial ranchers now breed them with other cattle for their many strong traits including smarts and easy calving. Bonnie Marris, well known for painting horses, wolves and other wildlife, shows off her ability to portray the essence of any animal. This herd of longhorn is easing across a shallow-water crossing. They’re beautiful, intelligent and lean. Sounds like a breed apart.