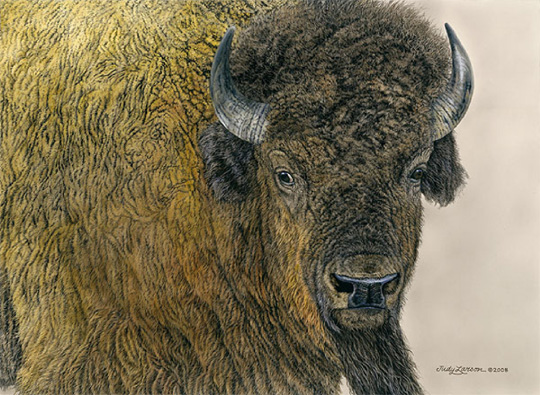 Slow Bull was a respected Oglala Sioux who joined his first war party at the age of fourteen. At the age of seventeen he captured 170 horses from the Apsaroke. That same year he received medicine from buffalo in a dream as he slept on a hilltop--not fasting or meditating, but resting from hard travel on the warpath. Over the course of his storied lifetime he engaged in fifty-five battles with rival tribes and his distinctive features can be seen in the shoulder of Judy Larson’s bull buffalo.

“I personally ‘met’ this bull buffalo in the middle of a thunderstorm," says artist Judy Larson. "He was roaming wild with three hundred other buffalo on the Fort Belknap Indian Reservation in Montana. Some of the oldest buffalo were nearing thirty-five years of age and most of the old bulls stayed by themselves, but this seasoned veteran had come to join the herd as rutting season began. He was massive and awesome.”