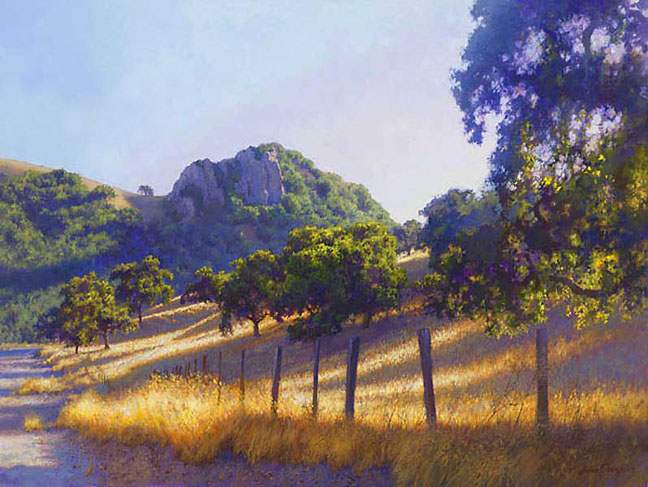 “I used to get in trouble for trespassing here,” says artist June Carey, who climbed fences to photograph and research Pacheco Pass. “You can imagine how happy I was when this incredible area became a state park and I could visit legally. Although the freeway now cuts into part of the scene in this painting, it takes nothing away from the rich history of the rancherias.” Named for 19th century ranch owner Don Francisco Perez Pacheco, the fertile Pacheco Pass was the home of the Ausaymus Indians for centuries. Living peacefully off the land, these Indians used a natural artesian spring they named “Bright Bubbling” as a year-round source of fresh water. This spring and its location would prove to be important in the years to come. A path was carved into the area by Indians traveling in from the coast to trade. After the establishment of the California Missions, the trail’s main travelers were Mission Padres attempting to convert the central Californian Indians. With the discovery of gold in 1848, this same area was part of the main travel route from coastal California to the mines. As the population increased, the area’s rich soil was cultivated to produce fruit trees and vineyards.