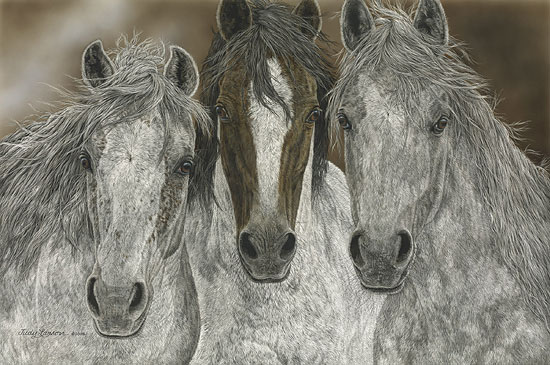 At the beginning of the 19th century, tens of thousands of wild horses dotted the landscape of Central and Southern California. As settlers, missionaries, ranchers and hunters vied for open range, however, the Mustangs fell prey to those who would profit by their death. Missionaries reported that in 1807, two herds of 7,000 wild horses each were driven into the ocean at Mission Santa Barbara to drown, and hundreds of wild horses were left in corrals to starve at San Diego Mission. In 1812, Spanish cattle ranchers, intent on utilizing the rich grasslands of the San Joaquin and Sacramento valleys, slaughtered 30,000 wild horses.
Considered a nuisance by sheep and cattle ranchers, who wanted public lands to pasture their livestock, another 40,000 were killed between 1828 and 1830, during the great drought of California. Hunters also joined in, hoping to import bighorn sheep to kill.
Throughout much of the 20th century, wild horses by the tens of thousands were killed, not only for their rangeland, but also for pet food. Almost 30 million pounds of horsemeat were canned in 1933 alone.
The decimation of wild horses continued until 1971, when the federal "Wild Horse and Burro Act" gave some protection to our country's wild horses. Still regarded today by many as grassland competitors, eyesores, habitat destroyers and misfits, however, wild horses continue to struggle to find their rightful place as free-roaming and respected animals. Rights to federal lands, "appropriate management levels," fire, drought, overgrazing, and many other issues have caused experts to agree that, at the present rate of decline, the Mustang could very well become extinct by the end of the century.
The Misfits is the sixth and final offering in the "On the Run" series. Countless other stories could be told, like those of The Fugitives, The Resisters, The Protesters, The Pursued and The Defiant. Perhaps, by revisiting a few of these happenings in our country's history, we will not be destined to repeat the events of the past, but will seek to value our wildlife and those animals which have found themselves to be in dire circumstances.