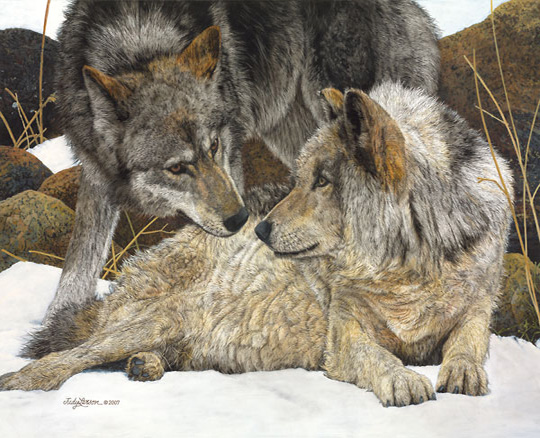 "The Alphas" by Judy Larson

Truly a family unit, a wolf pack is almost always composed of an alpha male, his alpha female mate and their offspring. During mating season, both the alpha male and female will fight to prevent others from breeding with their partner. Their monogamous relationship prevails until death, illness or injury prevents them from mating, or until one is ostracized from the pack. Courtship between the pair is playful, affectionate and devoted.

After the annual mating, the alpha female will select a suitable site for her den near water, which the nursing mother will need. She prefers a wooded area to aid concealment, and the same location may be used throughout her breeding life, and perhaps, by successive alpha females within the same pack. Preparations on the den begin about six weeks after conception, three weeks before her pups are born. And so, the cycle of life endures, through the alliance, friendship, bond and cooperation of "The Alphas".