Artifacts Gallery - Healing Power of the Raven Bundle
Only 1 Left!

Healing Power of the Raven Bundle
Only 1 Left! 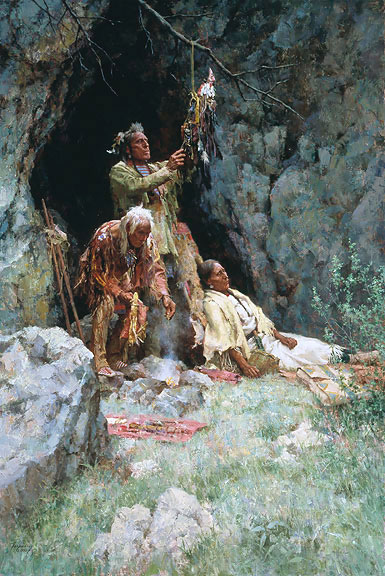 The Plains Indians believed that medicine men were empowered by their sacred bundles and could release forces to enhance the healing process,” Howard says. “The setting for this painting is a cave I visited on a ranch in Montana. In this scenario, a band of Crow Indians has camped nearby. A woman in the camp has developed a breathing problem, perhaps the early stages of pneumonia. Using a travois, her husband and a medicine man have brought her to this sacred location where she has been placed in an upright position to ease her breathing. As the scene unfolds, the medicine man is sprinkling sage and sweet grass on the fire to purify both the bundle and the participants in this ceremony. The husband assists by adjusting the raven bundle so that it is suspended directly over the woman. Such healing ceremonies often lasted for hours and might be repeated on subsequent days if the desired results were not forthcoming. We can only hope that this outcome was favorable.”