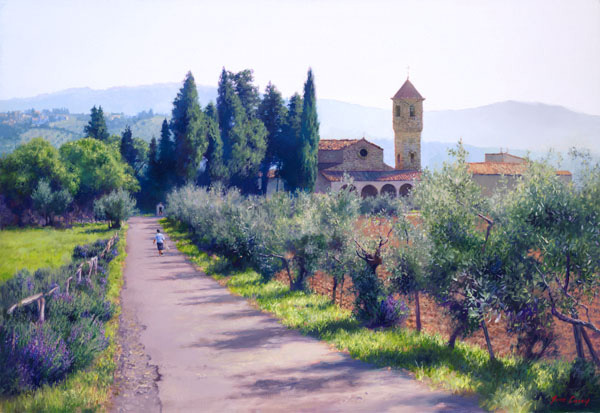 "Cercina Above Careggi" by June Carey

“The full name of the little church is Pieve di Sant'Andrea a Cercina. It is in the community of Sesto Fiorentino, just outside of Florence, Italy,” says June Carey. “To get there, I drove through the tiny village of Serpiolle. The stone walls close in on the street so that cars are expected to honk on the blind corners before going into them. If you are lucky, there is room for one small car. Once through the town at a deserted intersection was this church with its walled cemetery. Nearby, I saw this woman gathering greens from the field for dinner that night. She is my favorite part of the scene. I try to imagine myself getting older and living the life that she must live there. I would, however, probably be better at painting the scene than living it.

"I returned another time and the church looked deserted. The door was open and I went inside with my camera, thinking to grab a few photos. There was a very heavy scent of white lilies and in the dim light, across the barren interior courtyard I saw a table, where the lilies were in a large vase. I snapped one photo and was ready to fire the next, when suddenly, from a small doorway I didn't know existed, a nun appeared, speaking rapidly and waving a bony finger at me. Although I had no idea what she said, I knew she did not want me to take photos! So much for my love affair with the inside of old churches, I guess one should never assume a place is deserted in Italy.”