Artifacts Gallery - End of the Ridge

End of the Ridge 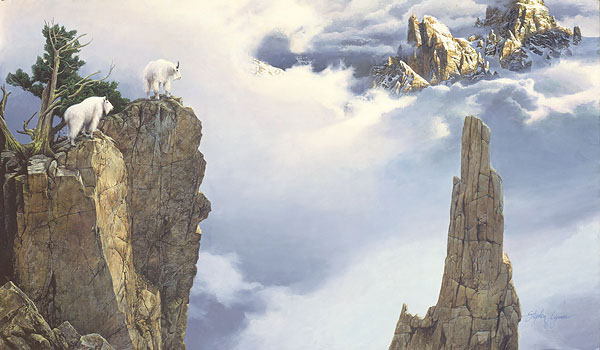 "End of the Ridge" by Stephen Lyman

Artist Stephen Lyman was inspired by wildlife and wilderness and nowhere more than in his beloved Yosemite Park. There, he could climb the highest point of a crest at 11,860 feet and feel seated on a throne in a place where the universe seemed upside down, as though gravity were irrelevant and the sky around him became an ocean. No wonder Lyman’s muse, naturalist and conservationist John Muir, said that from these heights in Yosemite he loved nothing more than to dip his head into the sky.

“On an off-trail backpacking trip, after a steep, strenuous climb up what I thought was the side of the mountain, the rock suddenly dropped away into space and I realized I was on a ridge,” said artist Stephen Lyman. “That experience was the inspiration for this painting. The mountain goats are surveying the expanse of a clearing storm from the ‘end of the ridge.’”