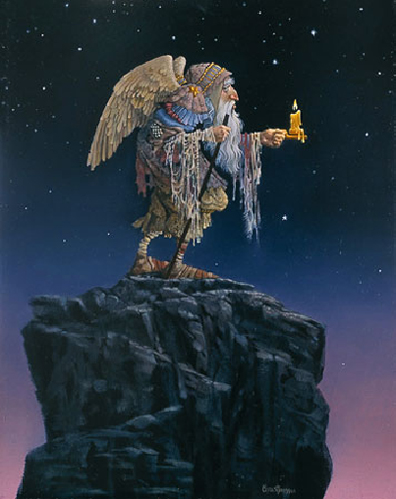 "The Oldest Angel" by James Christensen

"The idea for this ancient angel came to me completely out of the blue,” says artist James C. Christensen. “He started as a drawing in my sketchbook and he looked like he had been around forever. I imagine him at almost the farthest reaches of eternity. Every night he climbs up that little trail and holds out his candle. You can make up your own story about him. Where is he? Why is he here? Maybe he likes this spot. Maybe he's been up there, watching, since before the beginning of the world.” This classic Christensen angel was originally published in a fine art paper edition eighteen years ago and has been sold out in the market for nearly as long. Much history has passed since then, both personally for the artist and for us as a country and now this oldest of angels seems even more poignant as a symbol of eternal and almost defiant hope. This giclée canvas fine art anniversary edition will not exceed 350 copies so only a select few will own one to enjoy and to pass on to the next generation.