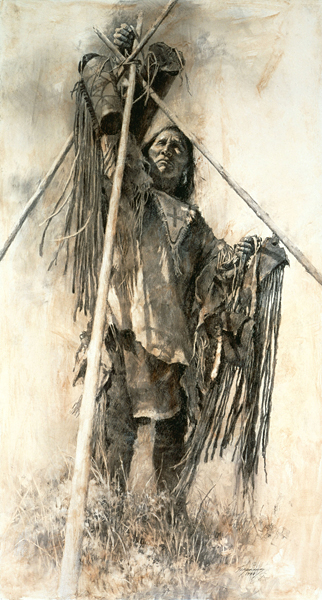 "Guarding the Lodge" by Howard Terpning

Let whoever may have attained so much as to have the power of drawing know that he holds a great treasure. Ż Michelangelo

There is a fundamental truth in art: learn to draw and the painting will follow. Drawing is the coordination of line, tone, perspective and proportion. It is the firm foundation on which a great painting rests. As a step in the creation of a painting itself, it is the part of the process by which the artist makes it clear to himself, not the spectator, what he is doing.

As finished art unto itself, Salvador Dali said, “Drawing is the honesty of the art. There is no possibility of cheating. It is either good or bad.” With Guarding the Lodge, we see just how remarkable and powerful a drawing can be. The original is a mixed-media charcoal drawing on masonite. It was the 1998 Gold Medal Award Winner for Drawing and Other Media at the annual Cowboy Artist of America show. During that same event, Terpning collected the Gold Medal Award for Oil Painting for Offerings to the Little People. To top off the evening of achievement, Howard took home the Artist Choice Award for Best in Show as well.

“This Blackfoot warrior is placing his sacred medicine bundles on a tripod outside of his tipi. These sacred bundles were always hung behind the tipi,” describes Terpning. “In working on this composition, I felt that the tripod itself was such a strong design element that I wanted to make sure that it was prominent in the overall layout of the picture. The important thing was to make sure that the figure was clearly visible and that the viewer could see that he was attaching the bundle as he held the other items in his left arm.”