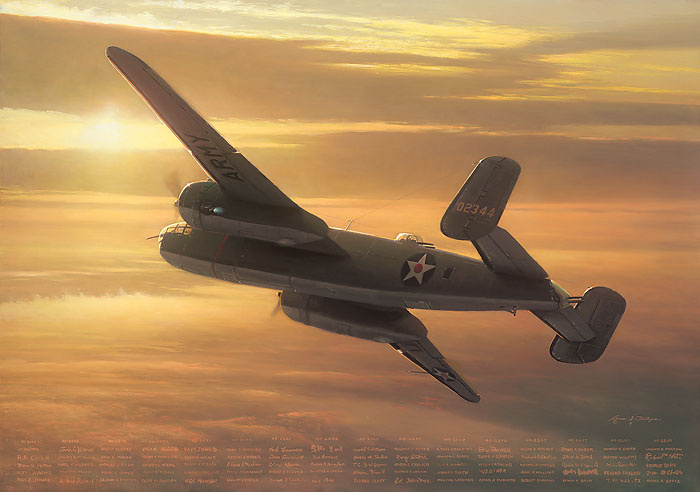 William Phillips’ first connection to the Doolittle Raid was through his father, an actor who played Lt. Donald Smith, pilot of plane 15 in the film 30 Seconds over Tokyo. In the early 1980s, Phillips’ sought out General Doolittle to consult on his idea for a painting, The Giant Begins to Stir. That meeting began a 30-year relationship with the Doolittle Tokyo Raiders and over a dozen paintings creating a one of kind visual history the historical event.

“I wanted this painting to have the feel of a Hollywood ending and I wanted it to be General Doolittle’s plane,” says Phillips. “The mission itself may be complete. But the sense of honor and duty that these men exhibited that day, that is something on which you can base your entire life. For the Raiders, it did.”

Mission Complete, The Journey Continues is counter-signed by all the attendees of the 70th Anniversary Doolittle Tokyo Raiders Reunion:

In addition to the actual signatures of these surviving Raiders on the giclče canvas reproduced within the image are signatures of over 40 of the members of the April 18, 1942 mission. Phillips took his original painting of The Giant Begins to Stir to the Raiders 41st Reunion and had each attending member paint his signature on the painting. Phillips’ filled in the names, by aircraft, of the rest of the airmen. Mission Complete, The Journey Continues is a beautiful, unique and complete historical document of one of the finest hours of American military history.