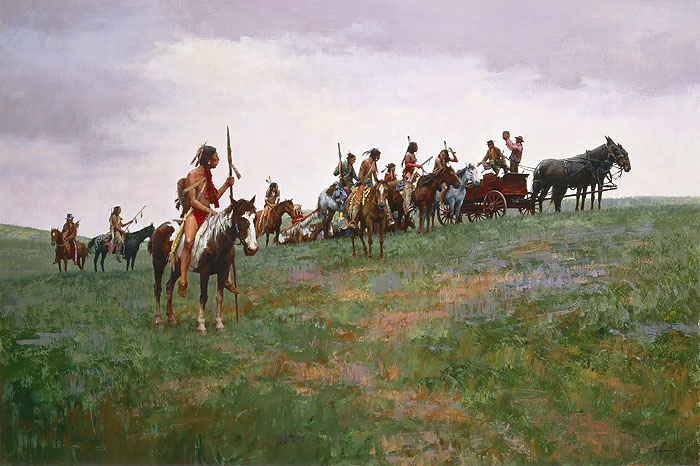 A band of Sioux warriors has come upon a wagon loaded down with contraband in Howard Terpning’s award-winning Whiskey Smugglers. The strangers talk and smile with their mouths but their eyes and their hearts are hard. The white man’s whiskey was a curse upon the People. It induced an initial euphoric state like that experienced during a sacred vision quest. But there were no spiritual revelations . . . nothing at all but drunkenness and despair. The white man’s empty promises and treaties could rob the People of their land. His whiskey could steal their souls.

Whiskey Smugglers won the Gold for Gouache at the 1998 Cowboy Artists of America show. It was one of five awards Howard took home that evening including two other Gold awards, the CA Award and to top it off, Best of Show. Guarding the Lodge, which was released last August and is Sold Out at Publisher, won one of those Gold awards.

Like Guarding the Lodge, Whiskey Smugglers is part of a special series paying tribute to the works Terpning created on paper. Reproduced on the finest archival watercolor paper, this Greenwich Workshop Fine Art Edition represents a distinct and impressionable aspect of the art of Howard Terpning as it was meant to be seen.