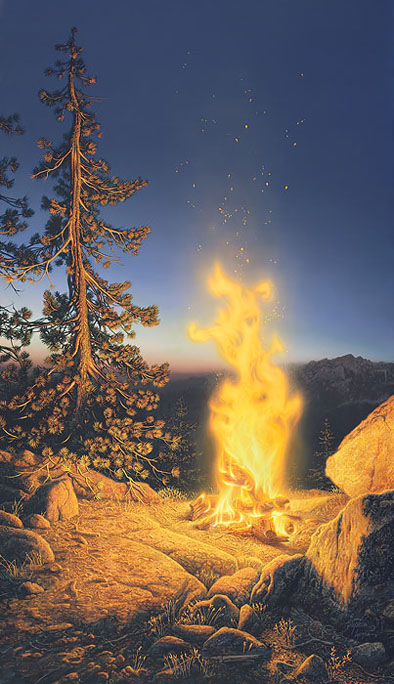 Artist Stephen Lyman was always on the lookout for a challenge, both in wilderness experiences and in his art. In the late 1980s, already with hundreds of campfires built and enjoyed, he realized he had never quite seen a really good painting of a campfire. He set out to study the unique combination of light, air and fire that becomes the beloved campfire that is both a symbol of independent rugged living and a link to our most primitive ancestors. His painting and subsequent Fine Art Print entitled A Mountain Campfire was the result and it became the first of series of what is now known as his “firelight series.”

Never content to do the same thing twice, Stephen perfected painting campfires at different times of day and varying landscapes, mostly in Yosemite National Park. In Sunset Fire, the setting is late summer, most of the snow has melted from the mountains so perhaps the fire is built less for heat than to cook a meal and as an inspiration for an evening of storytelling. The vertical composition, heightened by the towering pine, seems to lift the fire and embers into the twilight sky. Your friends will want to lean in for a hint of the smoky aroma if you bring the captivating warmth and irresistible attraction of this mountain campfire into your home.