Major North and the Pawnee Battalion 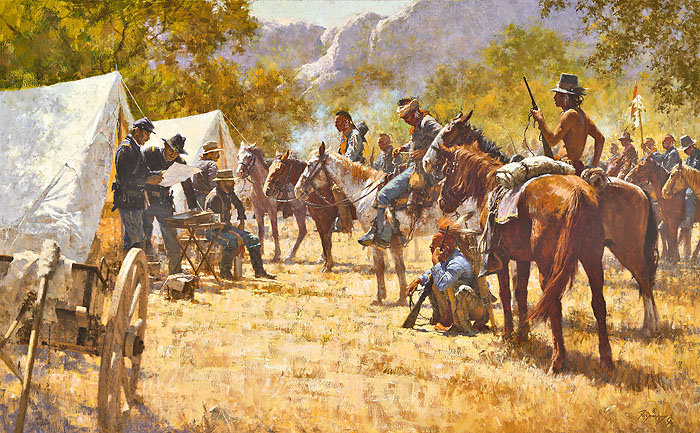 "Major North and the Pawnee Battalion" by Howard Terpning

Following the Civil War, U.S. troops were dispatched to the northern Great Plains to quell Indian uprisings. Major Frank North enlisted one hundred Pawnee scouts to assist in the early campaigns against their old enemy, the Sioux. They were able allies. Later, as the Union Pacific Railroad built out onto the plains, a contingent of two hundred Pawnee was sent to provide security for the construction crews and was formally designated as North’s Pawnee Battalion.

From the inspiration of an intriguing story, the Terpning goes on to work his magic. Beginning at the wagon wheel at left, the eye travels without rest through a vast range of unique moments in this painting: officers studying a map before a line of tents, their compatriots and horses, the atmospheric smoke, a central rider looking down, the Pawnee crouched, the individual with the high-hat and deftly angled rifle, to the flat behind with many Pawnee waiting in the distance. Then the eye rests a moment in the foreground then begins its journey all over again. The individuals are distinct, yet linked, like any command.