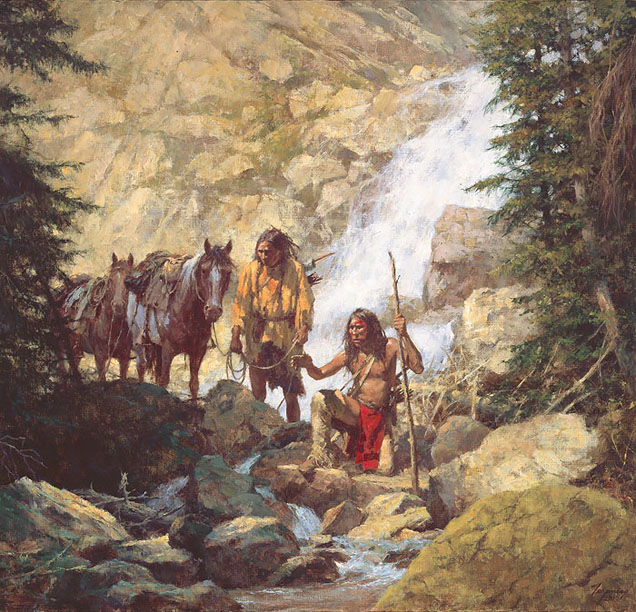 "The Trackers" by Howard Terpning

“Over the years, I have seen many come and visit, yet most miss the obvious opportunities to truly see and hear the unique qualities of our tribal homeland,” relates Blackfoot Daryl Kipp in his introduction of Howard Terpning’s A Tribute to the Plains People. “Howard’s paintings serve an important role for their profound portrayal of Indian people, which help capture the ever-fading image of early-day Native America.”

Terpning’s description of The Trackers is such an observation, “Scenes such as this played out countless times in the 18th and 19th centuries. We don't know who they are tracking, but they do not seem to sense immediate danger because they don’t have their bows in hand. They see signs among the rocks, such as a broken twig or displaced moss. We do know that they won't give up their search Ż whether they find the enemy they are seeking, we will never know.”

It is the power of Terpning’s artistic skill that enables these observations to be all the more profound. The Trackers is just the type of work to which Kipp refers. Two men inhabit a beautiful, pristine landscape. Howard conveys subtly, but implicitly, these men’s tie to it. For generations this has been their land and any disturbance to it will be noted and pursued.