When Prayers are Answered (Canvas) 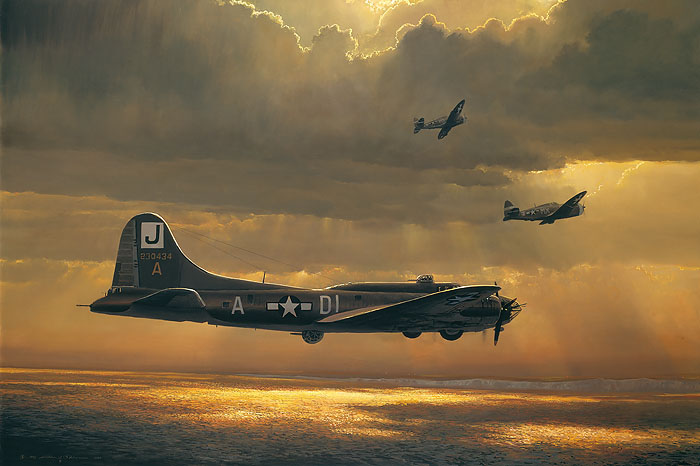 "When Prayers are Answered" by William Phillips

Thrashing away on three engines and a feathered prop, with flak damage to her wing and tail, this B-17F has survived another brutal mission over GermanyŻbut just barely. The Betty Boop/Pistol Packin’ Mama will make it through this day. The white line on the horizon is a bomber crew’s most prayed-for-sight: the chalk cliffs of England. Now the P-47 escort, mixture leaned out & flying on fumes, can peel off and slide down toward their base.

Operating out of Framlingham, England on October 10, 1943, Betty Boop/Pistol Packin’ Mama, of the 390th Bomb Group, 570th Bomb Squadron, was one of 133 B-17s dispatched for a daylight raid on Munster to target the railroad station and yard. Takeoff went smoothly and twelve P47 fighter escorts arrived to provide top cover, until reaching the limit of the fighters’ range. At that crucial juncture, the fighters turned for England and the bombers faced unrestrained German fighters while making their runsŻa concentrated and violent attack.

The sky was blackened with flak and peppered with over 200 German fighters including Fock-Wulf 190s, Junkers 88s and Messerschmitt 109s, 110s and 210s. For the 390th, eight crews and aircraft, out of their departing nineteen, were lost. The mission was grueling; the losses were brutal.

As the clouds part in this Bill Phillips’ trademark sky and rays of sunlight and hope stream down upon the chalk cliffs of England. Cold-sweat can begin to dry as another grueling mission nears its end and this B-17’s crew thanks the Lord for answering its fervent prayers.

Bill Phillips’ When Prayers are Answered is a visually stunning work of contemporary art from one of the most sought-after and collected aviation artists of our timeŻan exquisite piece of historic and patriotic art for your home or office.