Artifacts Gallery - Telling of the Legends

Telling of the Legends 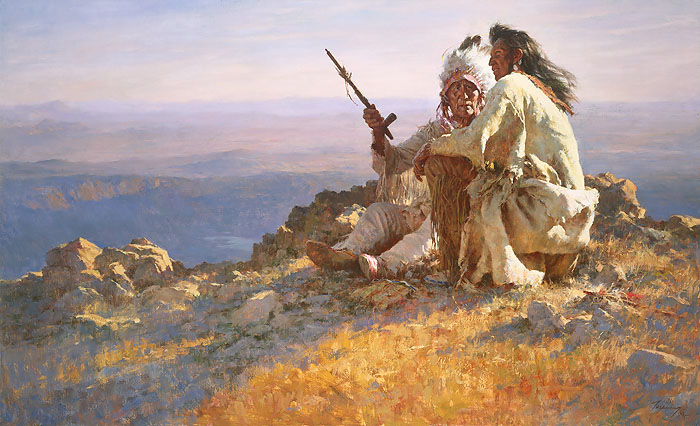 "Telling of the Legends" by Howard Terpning

Since the Plains Indians had no written language, old chiefs and medicine men passed on their wisdom, the traditions of the People and a measure of their own medicine to younger men who would become heirs to tribal authority. These chosen individuals then kept the legends alive and passed them down to the next generation.

Howard Terpning saw this scene in the early morning as dawn broke over the northern Montana. The rising sun was in bright contrast to the dark blue shadows marking the distant mountains and deep canyons. At the time he was atop Chief Mountain with George Kicking Woman, a Medicine Man of the Peigan Nation:

“Influencing every part of their lives, the Blackfeet legends included tales of the tribes’ origin, their religion, heroic deeds of their people and the evil ways of their enemies. I’ve tried to capture the mood of a sacred time,” says Terpning, “where a young man learns of this past and his future responsibilities.”

"Telling of the Legends" is a remarkable 51"w x 31"h Anniversary Edition Museum Edition Canvas. The original work of this work was sold at the Coeur d’Alene Auction in 2013 for over $1.7 million.