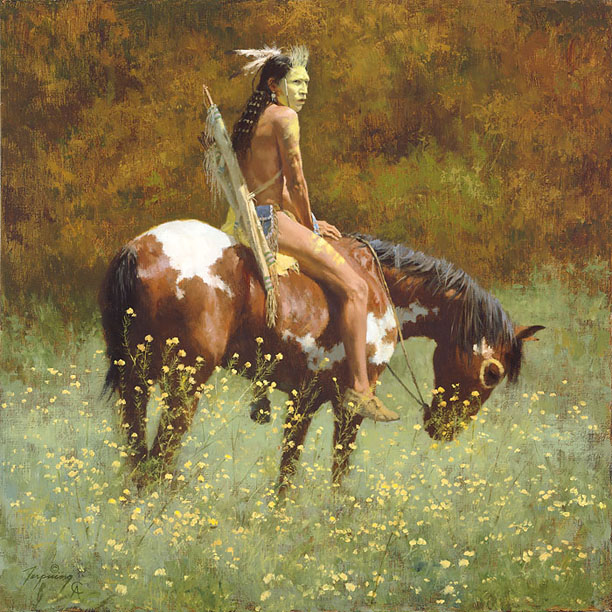 "Color of Sun" by Howard Terpning

The war paint on this young Native is the color of Sun, a sacred color with divine power. To the Plains warrior, such paint was far more than a means of appearing more ferocious before their enemies; it was also strong medicine used as a protective talisman in battle. The paint’s color and design was chosen to harmonize with each individual warrior’s own purpose, dreams and visions. He would not only paint his face, but his body and horse as well.

Yet, Terpning’s "Color of Sun" is not a story of war but of this Crow brave’s harmony with the land on which he lived. This field bathed with flowers was a place Terpning had once encountered and the vision of it lodged in him waiting for the proper time. Later, when he saw this man and horse it was natural to combine the two, particularly with the horse’s head tipped down toward the flowers.

"Once I had settled on the subject for this painting, it was a matter of balancing the human and animal figures and juxtaposing them with the yellow of the flowers and the somewhat interpretive greens and browns of the foreground and background," explains Terpning.

Howard Terpning’s "Color of Sun" has been chosen to become an Anniversary Edition Fine Art Canvas because it is a masterpiece in the study of harmony. It is a story of the harmony of the Plains People with their environment; of color and design; and of an artist with his subject. Be one of the few to own one of the finest works from one the greatest artists to ever paint the American West.