Shield of Her Husband (Canvas) 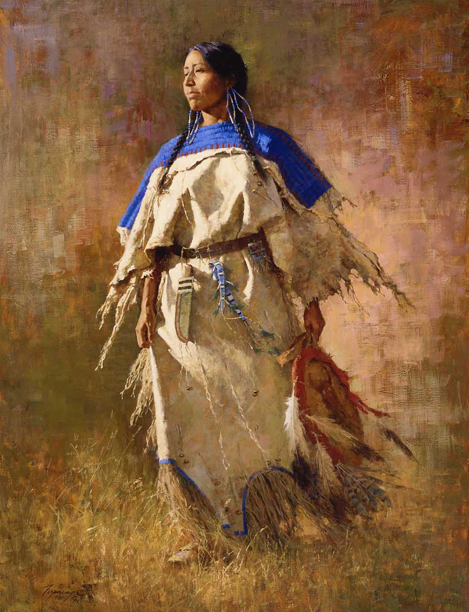 "Shield of Her Husband" by Howard Terpning

Among the Sioux people, the wife was allowed to carry the war shield of her husband. This was considered an honor and it enabled the wife to let everyone know that her husband was a true warrior. The shield was never allowed to touch the ground. Before the arrival of the horse, shields were quite large. The could be as much as three feet in diameter. When horses became available, the shield was reduced in size to about 18 or 20 inches because they were easier to carry on horseback. Shields were generally made from the hide on the hump of a buffalo because it was the thickest part. The finished shield could be a half an inch or more in thickness. They could deflect an arrow and in many cases even a lead musket ball. When more powerful rifles were developed, the shield lost its effectiveness.

The symbols painted on the shield were the result of a vision that was experienced by the owner. Buckskin hide covers were also made for the shield. Sometimes more than one and each one was decorated in a different way. Feathers from birds of prey were very important attachments. These shield covers were discarded when going into battle. The shield from a spiritual standpoint was the warriors most important possession.